Solar Dunes proposal envisions Mars habitat as a series of double-layered super domes made of crystallized basalt, raw regolith, and ice. Situated along the crater rims, each super dome with diameters spanning up to 200 meters can self-sustain a community of 50 habitants. As the population of Mars grows, the network of domes expands into a habitable human-made landscape.

DOME WITHIN A DOME
Each super dome, which can sustain 50 people, is configured as a dome within a dome. The outer-dome shell spanning up to 200 meters (size of a 70,000-seat super dome) functions as a protective envelope from harsh radiation, meteor impacts, and dust storms. The partially protected entrances and spectrally-selective solar fenestration allow people, vehicles, and sunlight access.
The interstitial space between the two shells provides a large area for the habitat to conduct field research and service equipment and facility. Since this space is semi-protected from the harsh environment, the crew can wear much lighter-duty space suites.

The inner-dome provides a fully pressurized environment consisted of live-work spaces, greenhouse, and support facilities. The greenhouse, located on the top of the dome, is encased in a translucent membrane for receiving filtered sunlight, and a combination of hydroponics, aeroponics, and soil-based growing systems are utilized for maximum food production. The support facility, located on the bottom of the dome, houses mechanical and electrical equipment that generate and store water and energy. Finally, the live-work spaces consist of a large atrium space
bounded by several layers of living quarters and workspaces (research pods). The inhabitants need to pass through airlocks to enter the inner dome or the research pods.

THE ANGLE OF REPOSE, REGOLITH, FRENAL LENS, AND ICE
The habitat is constructed in three phases: shell-support construction phase, shell construction phase, and support removal phase. During the shell-support construction phase, raw regolith is piled up into large mounds to serve as the support structure to build the shell of the dome. The angle of repose* of the regolith will define the natural slope of the dome, increasing the structural stability. Although Mars regolith mainly consists of basalt which is also common on Earth, the angle of repose will be significantly different (thus unique) due to the lower gravity of Mars.

The dome shell is constructed on top of the support mound using rovers with a flat Fresnel lens mounted on a 6-axis robotic arm. The concentrated sunlight through the Fresnel lens can reach 2-3 times the melting temperature of basalt, crystallizing the raw material into a reinforcement structure. The 6-axis robotic arm automatically tracts the movement of the sun, and the focal point, as the rover spirals up the mound. The shell of the dome itself is a multi-layered composite system consisting of reinforcement layers (i.e., waffle structure made of crystallized basalt), raw regolith layers, and ice layers. After the multi-layered composite shell is constructed, the raw regolith support is excavated out.

*The stable angle of specific granular material which is influenced by gravity and friction. 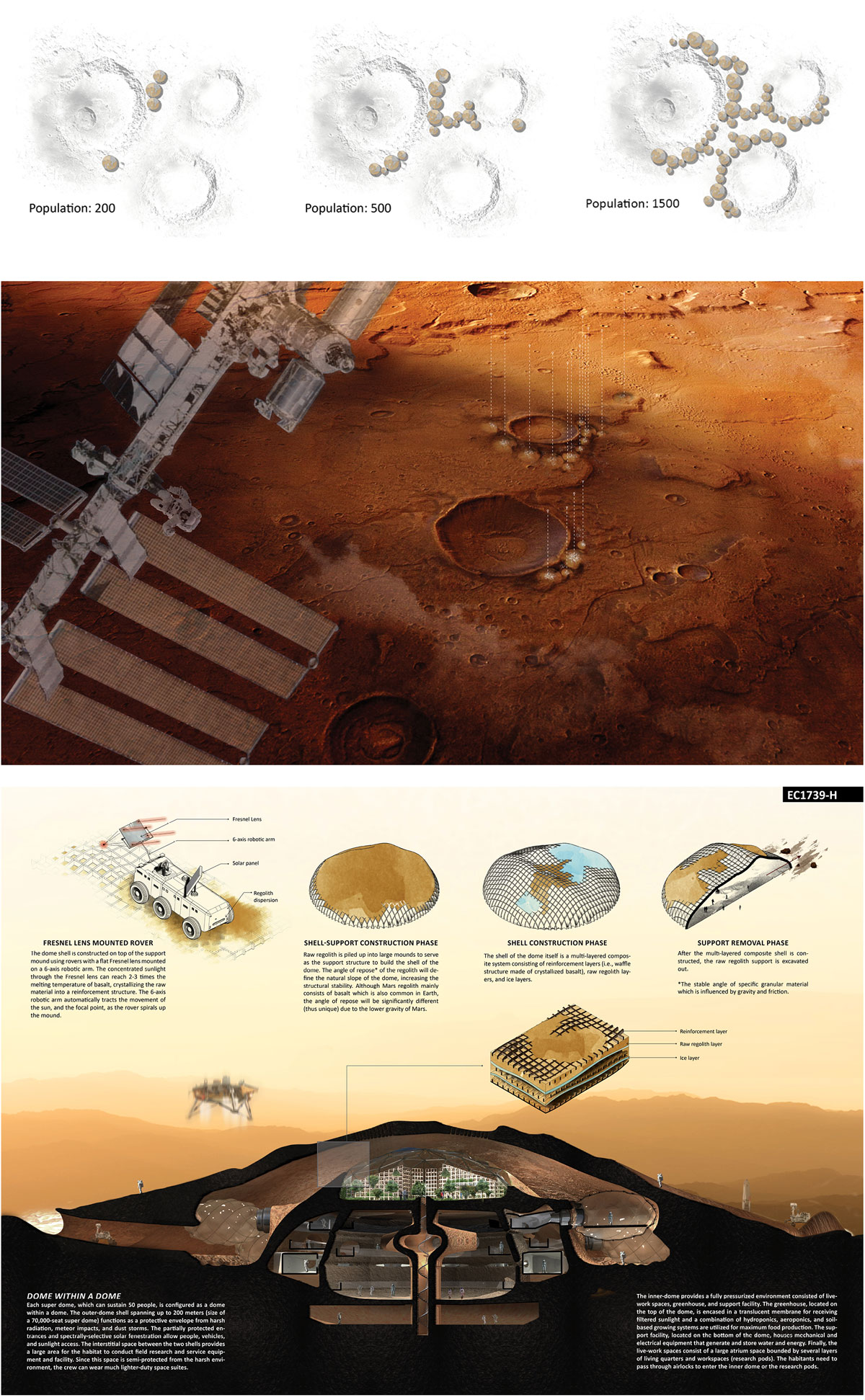